The crowdsourcing initiative Hellenic OCR Team reaches an important milestone. After less than three months of operation, the team has now expanded to 10 members. The members are originating from the private, the public and the academic sector. Currently, team members are resident in Greece and in France.  They are virtually linked through an online exchange platform and regularly gather for monthly meetings, where problems are discussed and best practices are exchanged.

On-going projects include state-of-the-art processing of parliamentary control data and generation of open data sets.  The ‘train of trainers’ approach is applied, e.g. older members are responsible for the training of new ones. This method of training was found to be most suitable for the sustainability of a -by definition- decentralized crowdsourcing effort.

By now, the training of all members is completed and the team is fully operational, having already begun with the processing of large bits of parliamentary data, so called ‘packages’. A total of three monthly meetings have been organized, the latest of which included a guided tour in the Hellenic Parliament. This little but growing interdisciplinary community of students, scholars and practitioners is looking forward to organize a maiden hackathon on the processing and evaluation of parliamentary data.

For more information or should there is interest in joining the Hellenic OCR Team please contact one of the following founding members: 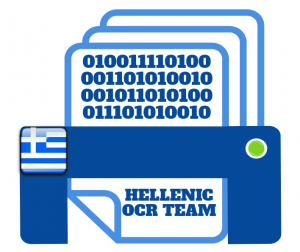