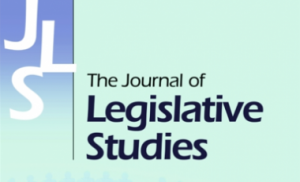 My latest publication on the application of Artificial Intelligence (AI) in parliaments has just been published at The Journal of Legislative Studies! As one of the first academic publications on the topic, it analyses the relevant case study from the Committee for the Future in the Finnish Parliament and draws conclusions for the digital evolution of legislatures.

In April 2021, the Committee for the Future of the Parliament of Finland (Eduskunta) organised an extraordinary hearing, that is, of an artificial intelligence (AI). While some legislatures and research groups had already begun to study the implication of AI in the parliamentary domain, this took the parliamentary world by surprise. It was the first time a parliament has directly interacted with an AI system in an actual parliamentary process. This research note attempts to conduct a preliminary analysis on the experiment and discusses its implications for future actions in the development of parliamentary tools and services using AI-based technologies. Analysis is dedicated to intra-parliamentary workspace, while considering possible effects on the main functions of parliament such as law-making and oversight. The note aims to spark the discussion around the implementation strategy, but also for the regulation of such systems in the parliamentary environment.