Impressions from the ICON-S in Florence

The Italian chapter of the ICON-S organized its second conference, which took place at the premises of UniFI, Università degli Studi di Firenze, in Florence, from 22nd to 23 November 2019. This international public law conference was titled Le Nuove Tecnologie e il Futuro del Diritto Pubblico (New Technologies and the Future of Public Law).

It was an overall successful and well visited event organized in two plenary sessions and over 110 (one hundred and ten!) highly interesting panels populated by acknowledged scholars and skilled practitioners. The full program may be accessed here. Naturally, artificial intelligence and its regulation stood at the center of discussion. Among the relevant contributions, the discussion on the topic of my recent book stood out. It is titled Imposing Regulation on Advanced Algorithms and is brought out by Springer. The book discusses the necessity and perhaps urgency for the regulation of algorithms on which new technologies rely. Its core chapters examine universally applicable patterns in administrative decisions and judicial rulings. The role of several stakeholders and particularly the involvement of parliaments, as major representative institutions, in algorithmic regulation are thoroughly discussed.

The panel was presided over by Prof. Nicola Lupo of LUISS, Rome. I had the opportunity to frame the topic and especially its parliamentary dimension. Other discussants included Prof. Monica Palmirani of the University of Bologna, Dr. Giovanni Rizzoni of the Italian Chamber of Deputies and Dr. Elena Griglio of the Italian Senate. The discussion provided useful insights to all who attended. Moreover, since the topic is far from being exhausted, several interesting opportunities for cooperation became visible, e.g. in the areas of data first or AI-assisted legislative drafting.

The conference also enabled the interaction of public law with distant scientific fields, such as in the case of the Hellenic OCT Team, our novel crowdsourcing initiative for the processing and analysis of parliamentary data. With Sotiris Leventis, Franco Gatti and myself, three of its currently 31 members were present at this significant event. The Hellenic OCR Team features as a good parliamentary practice at the latest edition of IPU’s (Inter-Parliamentary Union) innovation tracker. 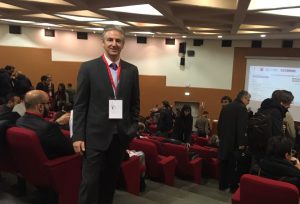 In the Aula Magna 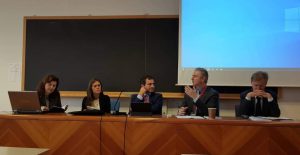 Impression from my presentation at the ICON-S