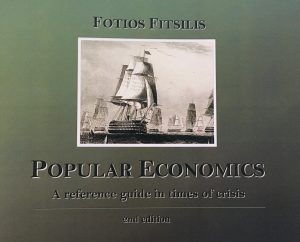 Good news for the fans of popular science! A new limited edition printed version of my 2013 electronic book titled “Popular Economics: A Reference Guide in Times of Crisis-the Greek Case Study” is out! Contact me and secure your personal copy.

This printed book is titled Popular Economics: A Reference Guide in Times of Crisis and it is based on a series of newspaper articles written between 2011-2012. It attempts to clarify some difficult terms and gives plain answers to contemporary problems. One does not need to obtain a degree in economics to read it. It is written for everybody who wants to take a glimpse at higher-level economics, without the strange economic terms that became overnight part of our life, hence its title “Popular Economics”. While highlighting the most important dimensions of the global financial crisis, Greece is used as a case study to display the effects of the rapid economic downturn in a modern economy, but also to study ways to escape recession. Though written almost 10 years ago, the book appears as timely as ever. Do not miss it!